(Chicago):   Every year since 2010, the Equal Pay Day Chicago coalition has held an Equal Pay Day event in Chicago. Ordinarily, March 31 would have been the date we gathered, to mark Equal Pay Day, which is the day where women’s pay on average catches up with men’s  average pay.  The persisting pay gap between women and men means women have less pay and fewer savings, which is a problem even in the best of times.  In these worst of times, the pay gap is devastating, especially on for women of color who experience the most significant gap.  So this year we are announcing a change in solidarity with our sisters of color, many of whom experience much wider wage gaps and bear much heavier burdens.

WHO:
WHY:    This year marks the 10th year that the Equal Pay Day Chicago coalition has planned equal pay events in Chicago. Traditionally, we’ve held those events on the Equal Pay Day in the spring that marks the average wage gap—which would be today. But we know that many women of color experience much wider gaps, and they won’t reach pay equity until later in the year.  Even before COVID-19, our coalition had decided to move this year’s Equal Pay Day event until the fall, to coincide with Latina Equal Pay Day, October 29, 2020.  Latina Equal Pay Day is the last equal pay day observed in 2020, highlighting the pay disparities even among women.  Under the rallying cry, “not without our sisters,” women’s advocacy organizations in Chicago decided to push back the Equal Pay Day rally to center the experiences of women of color, and in recognition of the fact that we will not close the gender wage gap until every woman is compensated with equal pay for equal work. 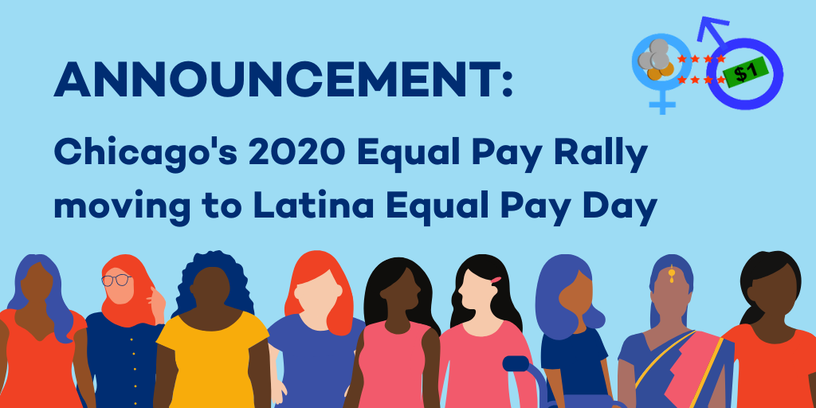 2/28/2020, CHICAGO –Tomorrow is Leap Day. And even though we get an extra day in 2020, that’s not nearly enough for women’s earnings to catch up to men’s. Women still face an average wage gap of almost 20%, and many women of color face much larger gaps. That is why the Equal Pay Day Chicago coalition announces that we will hold Chicago’s 2020 rally to end the gender wage gap on the last equal pay day observed in 2020—Latina Equal Pay Day on October 29th—rather than on March 31st when Equal Pay Day, marking the average gap for women, is observed nationally.

With this move, we recognize that we will not close the gender wage gap until every woman is compensated with equal pay for equal work. While on average, women earn 82 cents for every dollar white men earn, women of color routinely experience much wider wag gaps due to the compounding effects of gender and racial discrimination, and in recent years, some of those gaps have widened. Asian American and Pacific Islander women make an average of 90 cents for every dollar paid to white men, but some ethnic subgroups make as little as 50 cents. Black women make 62 cents. Native women make 57 cents. And Latinas make just 54 cents for every dollar paid to white men. It takes more than 22 months of work on average for Latinas to earn what white men do in 12.

“When we discuss the gender wage gap, it is important to recognize the true barriers Latinas face,” said Linda Xóchitl Tortolero, President & CEO of Mujeres Latinas en Acción. “By rallying on this day, we put the experiences of women of color at the forefront. Every woman deserves a fighting chance to help their families thrive.”

In Chicago and Cook County, where women of color hold the five highest elected offices—Mayor, Treasurer, City Clerk, President of the County Board, and County Clerk—as well as having women of color serving as the state’s lieutenant governor and comptroller—we are proud to center the experiences of women of color in the pay equity conversation.

“The average wage gap number we hear so often doesn’t tell the whole story,” said Barb Yong of Golan Christie Taglia LLP, chair of the Equal Pay Day Chicago coalition. “On the 10th annual equal pay event that our coalition has organized, we seek to lift up all women in this movement for pay equity.”
​
###
​

Susana A. Mendoza, Illinois Comptroller
"If we want to move our economy in the right direction, we need to close the gender wage gap that persists in the United States. Over a 40-year career, women earn $80,000 less than men for doing the exact same work. Those are lost earnings that could have been used to support a household, put children through college or save for retirement. It’s time to end this disparity."

“Racial inequities persist across the board, when it comes to criminal justice, health, life expectancy, and educational attainment—and equal pay is no exception. Women of color carry a double burden of both sexism and racism,” said Cook County Board President Toni Preckwinkle. “At the current rate of change, Black women will have to wait until 2124 for equal pay. Latina women will have to wait until 2233. I am grateful to the organizers of Equal Pay Day Chicago for moving the official date to Latina Equal Pay Day: we need to center equity in all the issues where racial disparities persist, and ensure that women of color achieve the same equality someday—and hopefully someday sooner than 2233.”

​Linda Xóchitl Tortolero, President & CEO of Mujeres Latinas en Acción
“When we discuss the gender wage gap, it is important to recognize the true barriers Latinas face.  By rallying on this day, we put the experiences of women of color at the forefront. Every woman deserves a fighting chance to help their families thrive.”

Barb Yong of Golan Christie Taglia LLP and Chair of the Equal Pay Day Coalition
​“The average wage gap number we hear so often doesn’t tell the whole story.  On the 10th annual equal pay event that our coalition has organized, we seek to lift up all women in this movement for pay equity.”

Ruth Holst, president of the Chicago branch of the American Association of University Women (AAUW)
"Student debt is another threat to economic security.  Women seek advanced degrees as a way to bridge the pay gap, but find themselves deeper in debt.  Women hold nearly two-thirds of the outstanding student debt in the United States as of 2019."

Elizabeth Toms, President, UN Women USA Chicago
“Equal pay is more than just the money women earn, it’s about the increase in choice, justice, opportunity, and empowerment that extends far beyond individual women themselves and into so much of our society. This is a global fact. UN Women, through the support of UN Women USA Chicago, joins in the fight for equal pay.”

Alexandra Eidenberg, WE WILL Founder
"Pay equity is at the forefront of all of our minds. Year after year, women and people of color are not making the wages they deserve. At a time when we are in a world crisis that is going to bankrupt millions it is again the women and children that will suffer most.  We can not continue to stand on the sidelines watching folks work hard every day and not be paid their fair share. WE WILL stands with our coalition partners fighting for pay equity."

Felicia Davis, President and CEO, Chicago Foundation for Women
“The COVID-19 outbreak has only made more clear what we already know, that paying women equitably and providing paid sick time, is essential to the economic vitality of our region and our country. The Equal Pay Day Rally is a way to bring awareness and remind everyone that pay equity and paid sick leave are not just a women’s issue – these issues affect us all.”

Debbie Vietinghoff, President, National Council of Jewish Women Chicago North Shore
Women earn 80 cents for every dollar earned by a man, a gap that is even wider for women of color. NCJW advocates for measures that would help close the gap, including updating and strengthening the Equal Pay Act, barring retaliation against workers who disclose their own wages to co-workers, and prohibiting employers from seeking a job applicant’s salary history. The COVID-19 outbreak adds new fears of illness, job layoffs, and economic insecurity.  For over 125 years, NCJW has fought for women, children and families.  NCJW will never stop fighting for pay equity.

“Nationally, 71 percent of households with children rely on women’s income for their economic well-being, and so many of the people on the front lines of this coronavirus crisis are women—, disproportionately black and brown women,” said Cherita Ellens, CEO of Women Employed. “They are healthcare workers, grocery clerks, cleaners, child care providers, food service workers, and caregivers. Their jobs are low paid, and many don’t have access to paid sick time or paid family and medical leave. In this moment, we have the power to act and use a gender-equity lens in creating new public policy and corporate solutions that ensure women and their families aren't left behind even more.”